In this content brief, we will basically discuss common questions surrounding slip rings. The brief comprises of 12 commonly asked questions about slip rings, and split rings. Each question is answered comprehensively, and further illustrative diagrams are provided.

Question 1: Why do we use slip rings in motors?

Inserting resistance to the rotor windings adds the rotor current more in contact with the stator current. The end product is high torque generation with comparatively low current. When the motor attains its functioning speed, the devices are shorted, making the brushes to be out of contact, and the engine starts operating as a primary AC induction motor.

Question 2: What is the difference between a slip ring and a split ring? 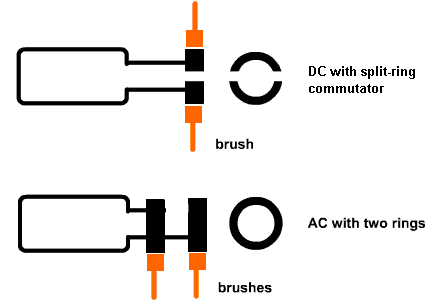 The major difference between the two devices is that a slip ring is applied in conducting power from a static to a moving part while a split ring is employed in a DC equipment to change the flow of the current. Secondly, a slip ring is designed as a continuous sealed circular ring with brushes on its outside layer while a split ring is split right from the middle forming two halves.

Question 3: What is the use of slip rings in AC generators?

AC generators are machines that turn the mechanical current into an electrical current using the rule of electromagnetic induction. Slip rings are used to connect the spinning frame of AC machines to exterior circuits. When the structure generates a discontinuous current, it appears on the slip ring.

Question 4: Are slip rings and a commutators the same thing?

Commutators and slip rings are both used to sustain electrical current flow between stationary and spinning parts. However, the most distinct characteristic between them is that a commutator converts ac to dc and vice versa while a slip ring doesn't.

Slip rings have just one function: establishing connections between static and rotating systems.

Question 5: What is the role of a slip ring?

A slip ring plays a role in a spinning electrical part to bring a continuous electrical link between static and rotating system. The concept allows the static power source to transfer signals to the moving part.

Basically, these are bands of electrically transmitting materials fixed on shafts. Though they are insulated from the shafts, slip rings are linked to the moving system via copper windings.

Question 6: What is the purpose of a slip ring?

A slip ring is purposely used in a moving electrical system to enable constant electrical association between fixed and rotating part. The concept makes an inert power source to transfer electrical current to the moving system.

These are bands of electrically transmitting materials fitted on shafts. Though they are separated from the shaft, slip rings are linked to the moving parts via windings.

The exterior surfaces of slip rings are in unceasing sliding interaction with static brushes.

Question 7: What is the function of a slip ring in a generator?

Slip rings are electromechanical machines which enable the conduction of current and signals from static to moving parts.

Remember, every loop is linked to one brush.

Question 8: What is the role of a slip ring in an electrical generator? 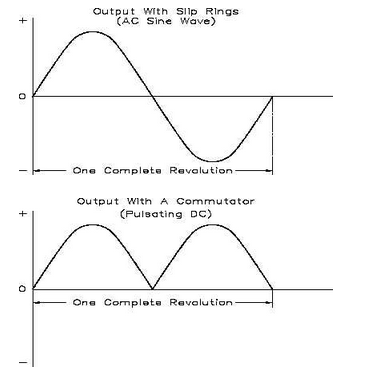 A slip ring is applied in an electric generator to bring out a sine wave output. For DC equipment, commutators are employed to offer outputs whose power always streams towards the positive direction, as illustrated in the diagram. However, this isn't the case with AC generators.

Hence, AC generators use slip rings that permit the output power and voltage to fluctuate in the positive and negative numbers.

The voltage and current fluctuation assume the figure of a sine wave.

Question 9: What is the difference between a commutator and a slip ring?

Question 10: How many slip rings do a synchronous motor have?

Synchronous motors are simply AC motors where, at steady state, the motions of the shafts are harmonized with the rate of the source current.

Synchronous motors contain discretely excited fields. When the source of the excitation is from a static DC, then the motor comprises of two slip rings.

A brushless motor lacks slip rings since the exciter frame spins and in turn spin the rectifiers.

Question 11: what is a slip ring in an alternator? 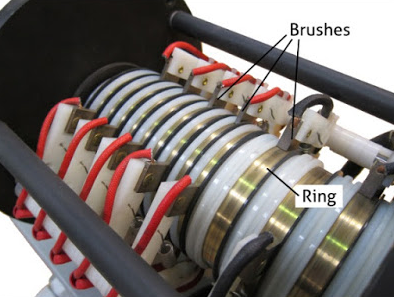 They are used to bring DC excitation to the rotors of alternators. A brushless excitation design doesn't require the use of a slip ring.

The DC produced after adaptation of the alternator running is static but the rotor, where the current should be conducted to, is rotating. Hence, slip rings are fitted to the rotor terminals that rotate at the speed of the shaft.

A brush, material that receive the DC output, is kept in touch with the moving slip ring and consistently conducts the DC supply into the rotor windings.

Question 12: Why are split rings used in motors?

To prevent the torque on a motor from turning back to AC every moment the coil spins via the plane in line with the magnetic field, split rings are employed to reverse the current at that moment.

Today's motors have spring-loaded carbon brushes instead of copper.

We are confident that at this point, you have learnt all the basics of slip rings and commutators, and you will not be confusing them anymore.

MOFLON Technologies is the leading slip ring manufacturer. Visit our online shop today and make your orders and you will realize the value of your money!